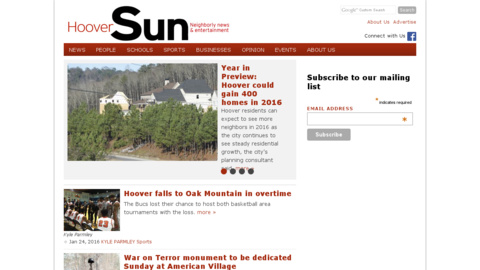 Following the recent approval of an entertainment district in downtown Homewood, the city has begun discussions over asking the state Legislature to grant two ...

The Hoover Recreation Center is one of multiple public buildings that will alter its hours of operations during the Christmas and New Year holidays.

Lights glisten against the evergreen tree as people gather at Hoover City Hall during the city''s annual tree lighting ceremony on Tuesday, Dec. 1, 2020.

From left: Deb Sellers, Sonya King, the founder of Two by Two Rescue, and John Sellers sit on the front steps with their newly acquired senior foster dog at the rescue group''s new location near Ross Bridge.

A Hoover Songbirds quartet sings "Let Me Call You Sweetheart." Director Fred Ernst said the Songbirds plan to use grant funds from the Hoover Arts Alliance to help pay for costume accessories and flower arrangements that are given out to members of their audience at each show.

Small business owners gather at Aldridge Gardens in late September for the first meeting of the Hoover Small Business Alliance.

A scene for the movie "Abandonment" was filmed at Hoover City Hall in September. The film is about a woman who goes hiking in the Appalachian mountains and is abandoned by her companion after being attacked by a bear and breaking her leg, according to Ben Moon, one of the producers, who lives in Bluff Park.

Spain Park''s Audrey Rothman (8) hugs her teammates after the Jags defeated McGill-Toolen in the Class 7A state championship game at Bill Harris Arena at the Birmingham Crossplex on Thursday, Oct. 28, 2021. Photo by Erin Nelson.

Hoover''s Reniya Kelly (10) shoots a layup during the AHSAA Class 7A girls state semifinal game against Auburn at the University of Alabama at Birmingham''s Bartow Arena on March 2. The Lady Bucs defeated Auburn 55-36 to advance to the state championship game.

Hoover High''s Rotimi Kukoyi, from left, Spain Park''s Shelby Millender and Hoover High''s Nena Kimble were recognized by the Hoover Board of Education during its Oct. 19 meeting for being selected by The College Board for the National African American Recognition Program. Not pictured is Hoover High''s Kaylei White.